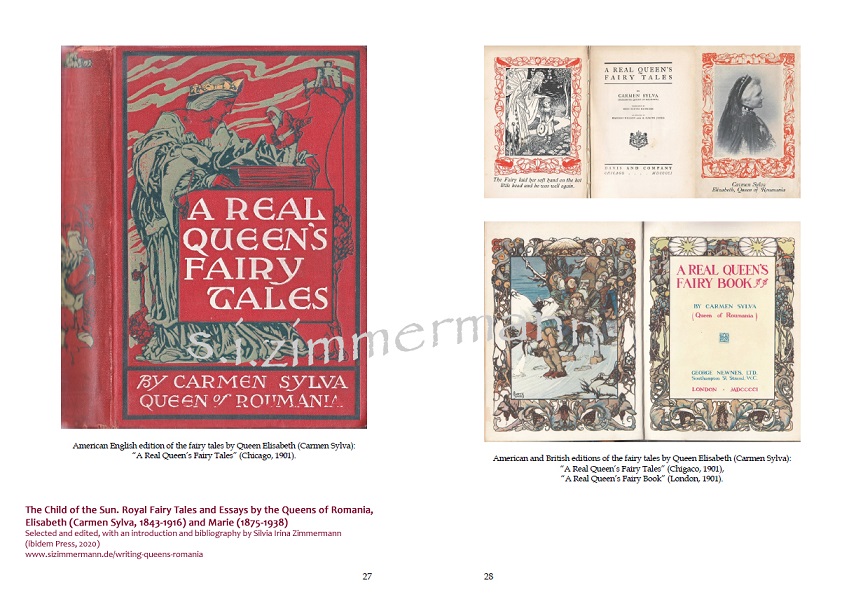 Queen Elisabeth (Carmen Sylva): “How I came to take the name of Carmen Sylva as my nom de plume“

Queen Elisabeth explains her pen name in an autobiographical tale for children, published in German in the volume “Märchen einer Königin” (1901) and in English translation in “A Real Queen’s Fairy Tales” (1901):

“I have very often been asked how I came to take the name of Carmen Sylva as my nom de plume. […] As a child I always thought I was not so good as the others, and not so well loved, because I was less lovable. And how I prayed that l might become better and worthier of being loved, and that God would also grant me the power in some way or other to set forth his praises, because my heart was always overflowing with thankfulness to see the world so beautiful, and to feel myself so full of youthful strength. And there in secret he planted in my breast the power of poetic song. But at first I did not understand rightly how glorious a gift God had given to me. I did not value it at all – I fancied every one could do just the same, if they only cared to try. And when I grew older and saw that it was really a gift bestowed upon me from on High, then I became still more afraid to speak of it, lest I should be thought vain and boastful. I did not even dare to learn the rules of my art, nor to correct mistakes that I had made; I felt as if that would be scarcely honest and sincere. When I married, I had already written a large volume of poems, and had tried my hand as well at the drama and at prose, writing my first story at eleven years of age and my first play at fourteen. But I knew quite well that it was all very poor stuff. Not till I was five and thirty did I let anything be printed, and that was only because so many people took the pains to copy verses from my scrap-book that I wanted to spare them the trouble and simplify matters. After a time I began to search for a name under which I could hide myself, so that nobody might ever suspect who I really was.
One morning I said to the doctor: “I want a very pretty, poetic name to publish under, and now that I am in Romania, and belong to a Latin people, it must be a Latin name. Yet it must have something in it to recall the land I came from. How do you say ‘forest’ in Latin?’
‘The forest is called silva – or, as some write it, sylva.’
‘That is charming! And what do you call a bird?’
‘Avis.’
‘I do not like that. It is not pretty. What’s the word for a short poem or song?’
‘In Latin that is carmen.’
I clapped my hands together. ‘I have my name. In German I am Waldgesang, the song of the woods, and in Latin that is carmen sylvae. But sylvae does not sound like a real name, so we must take a trifling liberty with it and I will be called Carmen Sylva.’”