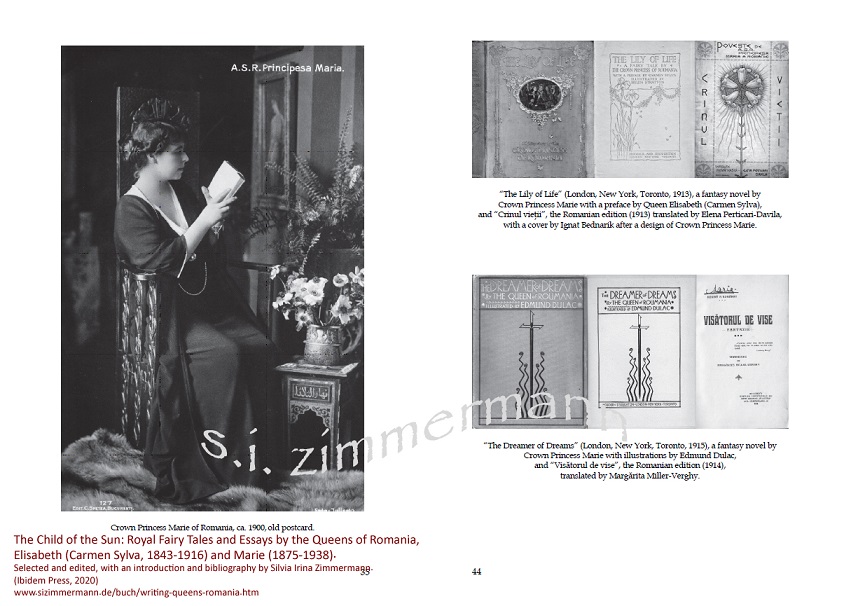 Queen Marie: “So I began to write fairy-tales”

Queen Marie of Romania relates in her memoirs “The Story of My Life” (1934) the beginnings of her writing activity by the time she was Crown Princess of Romania, while the old Queen Elisabeth of Romania (Carmen Sylva) encouraged her first steps in fictional writing:

“I have not as yet spoken about my writing. It began thus: Even as a child I possessed a vivid imagination and I liked telling stories to my sisters, when at night we all three lay in our small beds, side by side. Later it was to my children that I told my stories, and as I ripened the stories ripened with me and even my growing up children liked to listen. Out of the wealth of the visions that floated before my brain, I built up my tales. They were nearly always fantastic and my imagination was so vivid that I could conjure up marvelous places and wonderful people, sometimes heroic, sometimes grotesque or funny, and their lives were a mixture of pathos and absurdity, but through it all ran a strong strain of idealism, a touch of the romantic. […] So I began to write fairy-tales. They were not wonderful literature; I knew nothing whatever about writing, about style or composition, or about the “rules of the game,” but I did know how to conjure up beauty, also at times, emotion. I also had a vast store of words.

Carmen Sylva, when she discovered that I was writing, instead of laughing at me and being ironical about my modest attempts at literature, encouraged me from the very first in every way. She was getting old, her imagination was running dry and she declared that mine had come just in time to replace hers, which was a generous thing to say. She declared that it was a happy and blessed discovery that I could hold a pen, and no end of kind and enthusiastic things. She spurred me on to write, and each time I had finished a story she immediately wanted to have it so as to translate it into German. […]

At first I imagined that I could write nothing but fairy-tales, that I must continually describe the fantastic, the superhuman, in unreal worlds of imagination: mold picture upon picture out of nothing but beauty. I was moved by a regular thirst for beauty. […] But one day I discovered that I could describe, depict, a landscape, a village, a sunset, a dusty road; that I could with ease conjure up also visions of everyday places, of everyday people; everything picturesque attracted me. I felt the atmosphere, the pathos, that something which lies beneath what is merely seen by the eye, I felt it all, and whilst I wrote I understood that this had come to me little by little through my growing love for my adopted country. I realized how deeply I had absorbed the beauties, the characteristics, the quaintness peculiar to Romania, and I knew that I should be able to describe it one day—and that knowledge made me feel strong and rich. I was still extremely hesitant about what form, what style was going to be mine; the weird had a too great attraction for me, and I was so unlearned, but the visions, pictures, emotions, sensations were all there, lying within me ready to be born. So I simply went on writing, humbly, without any pretensions, because, having begun I could not lay down my pen.”